The Hunt (Book Reviews) The Process (Writing Blogs) The Gallery (GIF Collection)
My house is glass, and I've got rocks in my pockets.

Where are we starting from?

I have a binder right now with two full notebooks (one college ruled, one wide), and a third notebook that's about half full. This binder is labeled with "Dream Ripper: 2021/2022," a name that I don't know if I'll go with, but is much better than the working name that I used for my first draft. 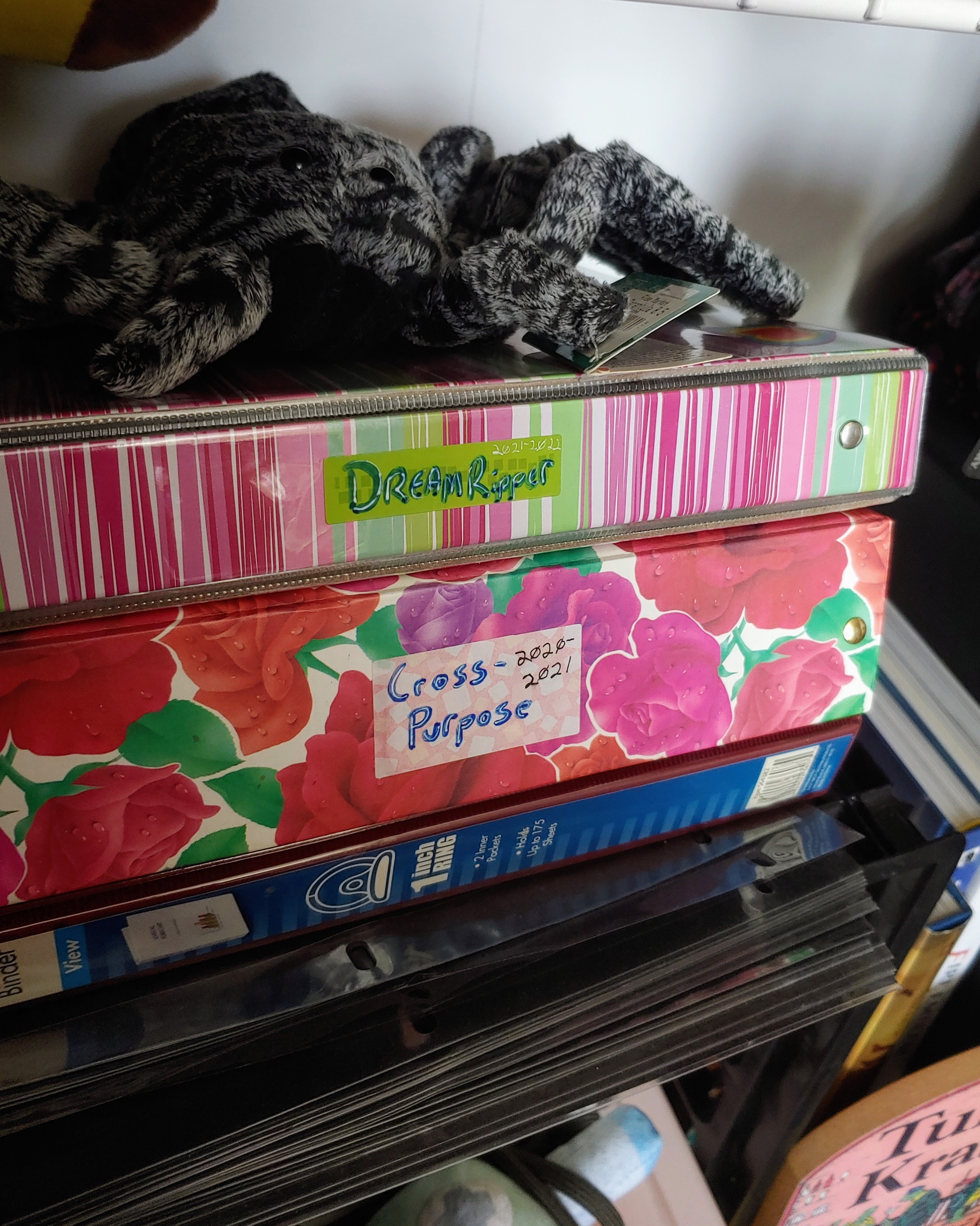 My project stack, featuring a hard-to-spot folder for another project, and a guard-spider.

Originally, it was a National Novel Writing Month (NaNoWriMo) project. A simple challenge to myself to create something that technically fits the definition of a novel in only 30 days. I hit 50,000 words after about 20 days. Ahead of the curve, mostly because I was really, crazy intent on accomplishing this thing. I carved out whatever time I could, to the point of doing a lot of work for my classes ahead of time--I'd finished my Anthropology final paper about a month and a half before it was due, because I knew it would take away from novel-writing time. I was stressed, anxious, emotional, both during and leading up to the month of November. As my plans for the story took form, I fell into self-doubt, a necessary step for every project I work on. Wondered if this was the right thing to make. Writing is a slow process; I always want to make sure that I'm putting my hours towards the best possible outlet.

Ultimately, though, I committed. Part of the design of NaNoWriMo is that it puts a fire under your ass--there's no time to worry about whether you should be writing, because you've decided you're gonna be meeting a frightening deadline, and that's all you can think about. I churned out a story that was bare bones and frantically paced, reflecting my own hurry to get to the end, and I didn't look at it for a couple of months after. During those months, the doubts that had bedeviled me during October returned, unresolved.

See, this story I'm making is about things I'm not knowledgeable in at all. It's set in the 70s--a time in which I didn't exist--the lead is a Catholic priest--I didn't grow up going to any church, let alone a Catholic one--and said lead, as well as his love interest, are both twice my age. The only thing in this story that I could say I know anything about is its queerness. It's a gay love story. I know what it's like to be gay. But, I don't know what it was like to be gay in the 70s, or to be gay and Catholic, or...

So, I addressed my lack of knowledge as best I could. Read a lot. Researched a lot. I highly recommend Father McNeill's The Church and the Homosexual for anyone interested in the history of the Catholic Church and queerness. Along with that, I read other books by gay priests of other denominations, but none were as useful as McNeill's. I brushed up on my queer history so I could properly capture a story set so soon after Stonewall. And, though I obviously haven't read them in full, I got my hands on a couple of academic study-oriented versions of the Bible. I'll probably find use for those in school down the line, at least.

Wow. Listing out all of the effort I put into this makes it sound silly that I think I'm not equipped to handle this story. In truth, I think I'll always feel unprepared. Uncurable Imposter Syndrome. That's a lot of research I put into a book so that I could... wait, isn't there already a first draft?

I'm sure you have a lot of questions now!

So, why am I throwing myself at this project that's already been written? I said I have notebooks, but the original NaNoWriMo verson of the book is all digital, though I printed it out for archival and editing use. There was no way I was going to dare myself to write 50,000 words by hand.

The notebooks are a second draft. A messy, total rewrite of a second draft. See, when I was in the planning phases of Dream Ripper back in October, I cut out the gay romance aspect. The one thing I knew I could actually write, and I gutted it, mostly because I wanted to write something that I could show my father. The draft that I called "done" at the end of November was lacking the most pivotal part of the story, on top of having been written in 20-ish days. Something had to be done.

I started on the new version of the story sometime around February, deciding to forgo the strict style of plan that I'd followed in November, favoring something a little looser, so that I could figure more things out on the page. This one would be hand-written, for a number of reasons I may blog about on another day. In a nutshell, I like the freedom that writing by hand gives me, as well as the way it slows my thoughts. Hopefully, this time I'll write something that I can be happy with. It will need extensive editing in the transcription process, but I'll be more confident all around. Now, I'm two and a half notebooks in, and I've got a long way to go, and I'm fighting that incurable doubt again.

The writing process at this point in my life is as much about figuring out what works best for me as it is about putting out good work. The way I figure it, the sooner I can get a grasp on the right methods to bring out the most consistent version of myself, the better chance I have at having a long term career in writing fiction. It sounds ambitious, even ridiculous, to say I want such a thing, but I have to keep saying it until I believe it myself. That's part of the reason I'm gonna be blogging my efforts. Hopefully, by working through my thoughts and struggles, I'll get a better handle on the Imposter Syndrome, and I'll be able to look back on how my outlook has improved. Better still, maybe it'll help me find that elusive right method to use for all my writing going forward.

That's where I'm at right now. Ground zero, for those of you reading this blog. I look forward to sharing my process going forward.